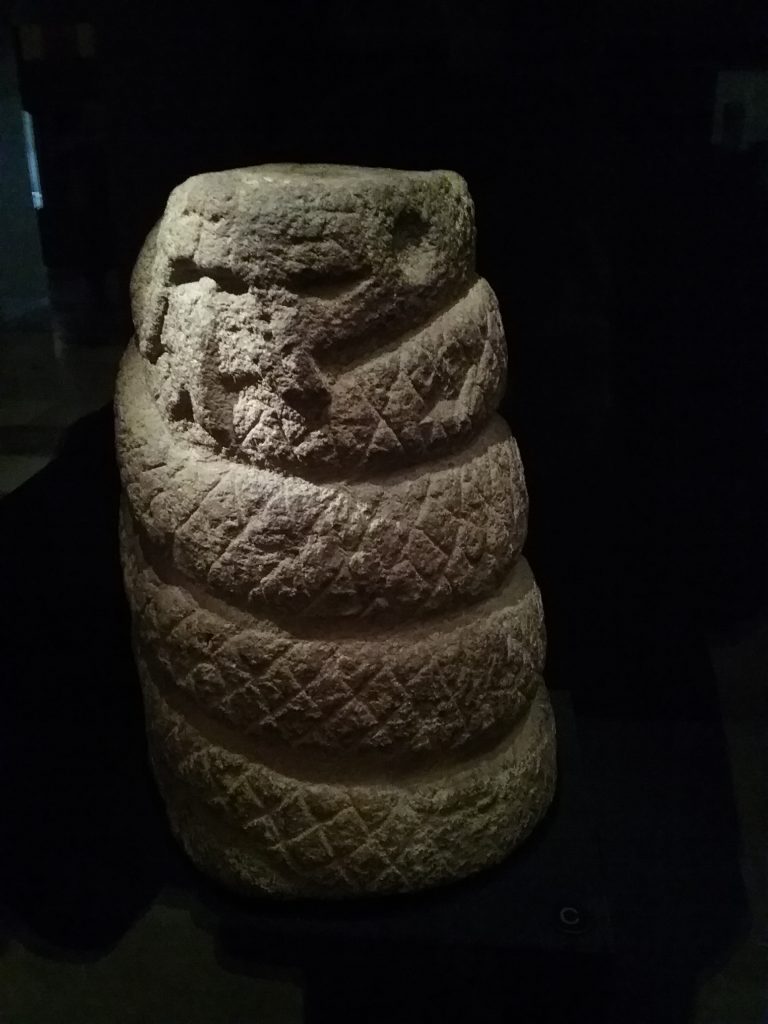 Continuing from last week’s post about my January trip to Washington DC, I’d like to share my impressions and photos of the Library of Congress. For some reason, this building was open during the partial government shutdown and I’m so very glad it was.

First off, the Library of Congress is located in the Thomas Jefferson Building. The building is called that because Thomas Jefferson sold his significant personal library to the United States after the original library, which was housed in the Capitol Building, was burned by British troops in 1814. (In case that isn’t especially clear, the British burned the Capitol Building and the library went up in flames as a result.)

This Library of Congress building opened in 1897, with the project starting in 1888, and the decoration of the building starting in 1892. It is apparent by the lavish art and sculpture in the building that it probably took the five years until the public opening to finish the visual confectionery delight that is the library. You walk in and just gawp, forgetting that this is a place that houses a massive collection of knowledge in terms of books, maps, photos, manuscripts, & etc. The structure, murals, and sculptures all honor that knowledge without there being so much as a book in sight.

And then you move from the Great Hall into one of the smaller areas off to the side and discover exhibits. Did you know the Library of Congress has exhibits? I didn’t until I went and was appreciative of this fact. It would be very easy for the library to tuck every precious item away, never to be seen again by the public. (Think the Ark of the Covenant in Raiders of the Lost Ark.) But, it’s obvious the library takes its public service role seriously. We, as a democratic society, fund the library and its collections. By rights, it is ours as a collective and we ought to have access to it in a way that safely preserves the collection.

On exhibit in one area is a Gutenberg Bible, one of the rare, full copies of the first book printed using movable type. There weren’t that many printed in the 1450s (around 180 copies) and fewer than 50 still exist, with only 21 being complete … like the one on exhibit. (Aren’t cellphone cameras great? No need to remember an exhibit label, the source of the info in this paragraph, when you’ve got a camera handy. Yes, the library allows for no-flash photography.)

In an area near the Gutenberg Bible was a small map exhibit: Mapping a New Nation. Within the exhibit, much to my surprise, was a map of Minnesota. Well, of course I had to take a photo! And then I had to zoom in and take a photo of Morrison County, where I live and work. I noted that the exhibit label didn’t have an exact date for the map; it just said “186-.” When I looked more closely at Morrison County, I realized the townships on the east side of the county were labeled, but none on the west side. Hmm. That’s curious. And the townships on the east side didn’t match our current townships. Even more curious! I wondered if I could date the map more accurately if I could find out more about these townships, so I brought home a research project from vacation. (I’m working on writing up my findings now and will release my discoveries in an article through the Morrison County Historical Society.)

Eventually, after wandering around taking in the murals and other decor, we headed upstairs to see a re-creation of Thomas Jefferson’s library.

Jefferson’s library contained 6,487 books and the library has a round room filled with enclosed book cases to display those that remain. About two-thirds of his collection was destroyed in another fire in 1851. Two thousand of Jefferson’s original books are part of this exhibit, along with another 3,000 books from the Library of Congress collection that match those from Jefferson’s collection that were destroyed in the fire. Copies of other books lost in the fire have been donated to add to this collection. Because this is a working library, some of the books were out for use.

This Minerva mosaic is a wonder of artistry. The library has a sign telling people not to take photos while standing on the stairs and I can see why. When lining up a shot to capture this beauty, it would be easy to fall down the stairs. I took this shot from the mezzanine above, before descending the stairs.

About all the sculptures and stone work and this mosaic … did you know the Library of Congress has masons on-staff who do nothing but maintain all of this wonderful work? My husband talked to one of them, a man with 20-30 years of experience before getting this gig, and he’s one of the novices!

By this time, my brain was getting stuffed, but I wanted to examine the Exploring the Early Americas exhibit closely. So many fascinating objects I had difficulty picking a favorite. I like the expression on this jaguar.

He looks like a friendly, goofy house cat, not a ferocious jaguar.

I also got a photo of a Maya codex and codex-style vase.

You know what I didn’t capture? A photo of the Maya calendar, which would have been perfect as my featured time-related image for this post. Instead, I got this … an exhibit label discussing the Maya calendar.

Wait a second … What’s that I see? A snake sculpture featuring a rabbit, specifically “One Rabbit,” which “may refer to the day of the creation of the earth,” or it may depict the year of One Rabbit, “which recurs once every fifty-two years in the [Aztec] calendar round.”

Well, I did get a picture of that! Rabbits as timekeepers … that certainly broadens my concept of marking time.

Beyond the Early Americas exhibit, there was a room for the Waldseemuller Map, but I couldn’t pay much attention to the items in this room because the murals on the walls caught my attention, particularly this one:

I do believe this might be an early depiction of the Angry Bird.

I will wrap up this post with one final image from the Library of Congress, a place that is well worth visiting if you are in DC.

A mural quote that brings together my love of books and history: “In books lies the soul of the whole past time.”