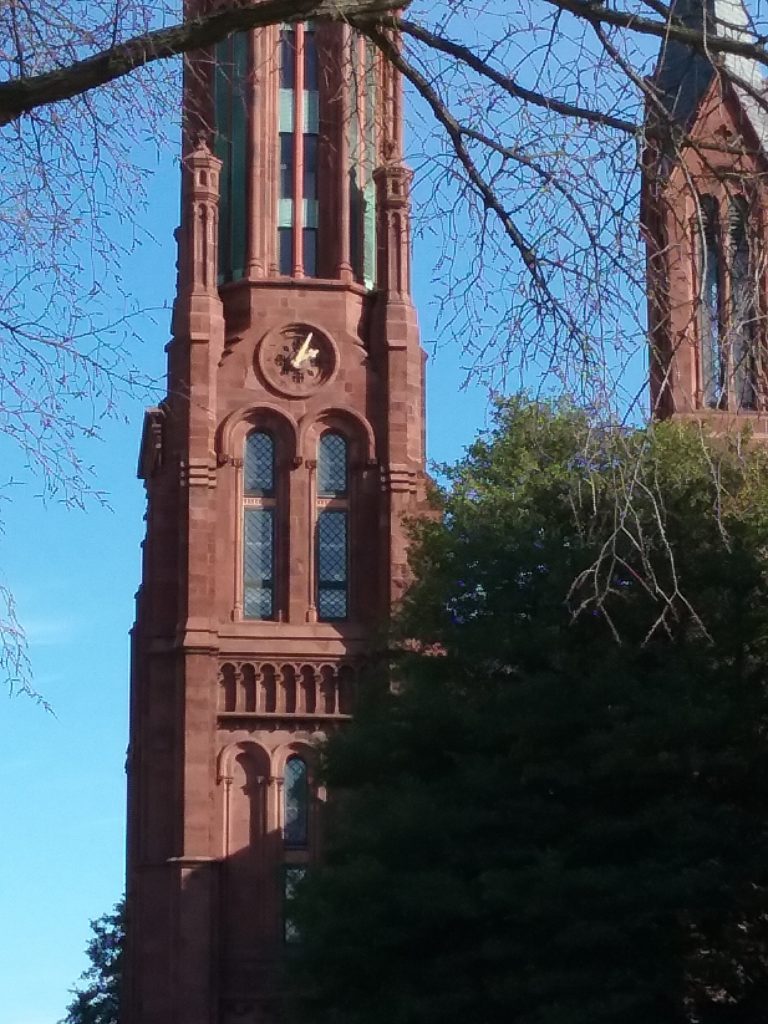 I recently returned from a trip to the Washington DC area. My brother and his wife invited my husband and me out. It was my first trip to DC and wouldn’t you know it, there was a partial government shutdown. None of the Smithsonian Museums were open. This ended up being a blessing, not because I didn’t want to see any of the Smithsonian-related museums, but because I wanted to see too many of them. My brain likely would have exploded from overload. As it was, it was plenty overloaded with a walk around the National Mall.

As we walked our 11+ miles around the Mall (my brother has a step-counter), it dawned on me that the buildings and monuments that make up the National Mall create what is in essence an outdoor museum with very large artifacts. Of course I took loads of pictures.

Now, sit back and enjoy the photos in my DC travelogue …

We started our journey around the Mall near the Washington Monument, which is currently closed so the elevator can be modernized. Of course I had to try to get a photo from a rakish angle. (As with any trip to new places, I take loads of photos in the hopes that some will turn out. I’ll try not to overshare.)

We made our way from here toward the Lincoln Memorial, which meant viewing the World War II Memorial,  the Vietnam Women’s Memorial and Vietnam Wall.

The design of the Vietnam Wall is amazing. When you first enter, the gravity of the space doesn’t hit you. When you get to the center and are surrounded by names, the solemnity of the memorial overcomes you. It’s a moving memorial.

Next was the Three Servicemen statue.

How many people look at the back side of the statues? They are just as artfully detailed as the front sides.

After this, we came to the Lincoln Memorial. One of the benefits of visiting DC during a partial shutdown is that the sites weren’t very crowded. This allowed us to get close to Lincoln without struggling through throngs of people. I even managed a couple of shots of Lincoln without any people in them.

After the Lincoln Memorial, we went to the Korean War Veterans Memorial. This war is often called “The Forgotten War” and I think the memorial is overlooked as well. There are these rather ghostly looking statues of soldiers, but also a granite wall with ghostly faces etched into it.

As we rounded the wall of the Koran War Veterans Memorial, we found a surprise. On the portion of the wall where acknowledgements for the memorial are engraved, we discovered the Cold Spring Granite Company listed. They’re from Central Minnesota!

We crossed Independence Avenue in order to see the Martin Luther King, Jr. Memorial, another monument with a meaningful design. I love how the stone with King appears to be pulled from the middle of the other two stones and you have to walk through these stones to get to King. It encourages us to walk in his path, work for diversity and equality.

By this time in our tour, we’d been walking for some time and it was chilly that day, so we quickly made our way to the National Botanical Garden, which happened to be open. Along the way, we saw the Smithsonian Castle, the National Museum of the American Indian, and many other wonderful buildings, but I was too cold to stop and take many pictures.

Our respite from the cold … the National Botanical Garden.

And, of course, we also saw the U.S. Capitol during our National Mall tour.

By this time, we were exhausted and we headed back to the car in order to check in to our Airbnb. Simply posting this small sample of the hundreds of photos I took has probably taken half the time it took for us to walk the National Mall. Time to end this travelogue.