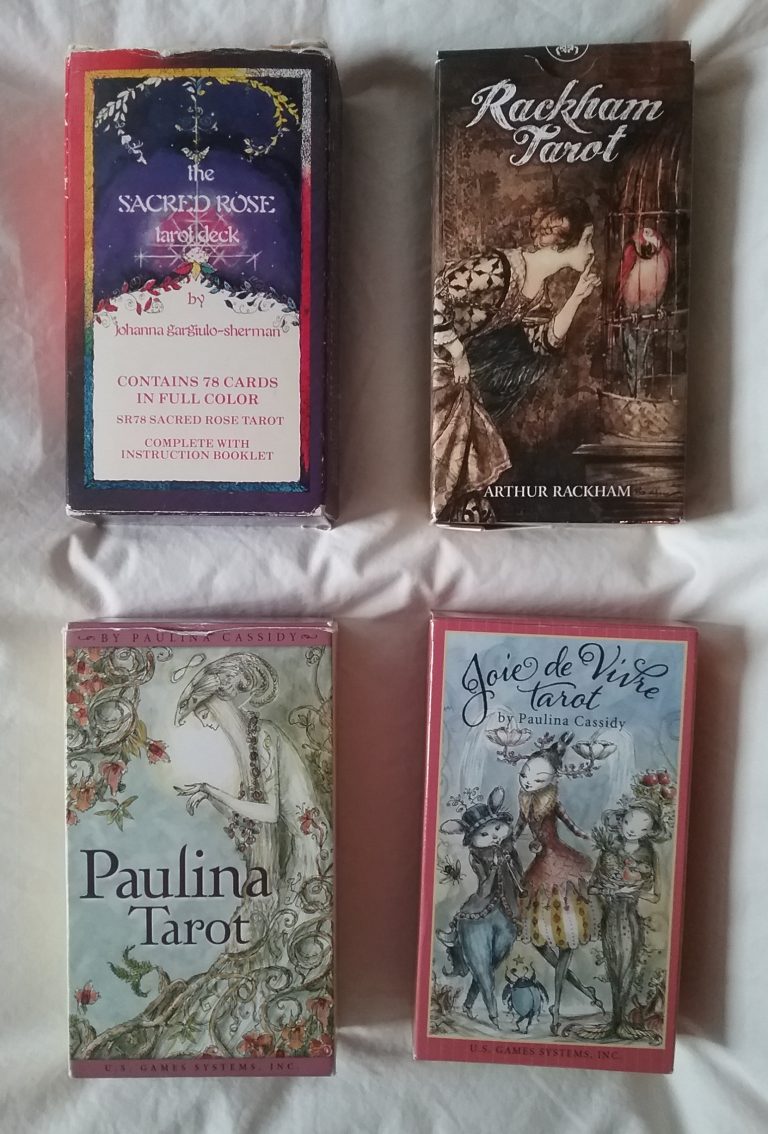 Happy Easter! Given the pandemic and the necessary stay-at-home order we are under, this is not a normal Easter. On a typical Easter, we would be getting together with family to eat a nice dinner and socialize. It would also be somewhat warmer.

Instead, we are all in our individual homes doing homely (in the British sense of the word) things and it’s around freezing in Minnesota, with snow in the metro. I am writing this blog post and then I will turn my attention to making masks for family members, which I will write about in a separate post. (Trying not to get sidetracked here, which is pretty difficult ’cause the thoughts are poppin’.)

Easter is a time of rebirth and enlightenment. Over the past year, I have dedicated myself to learning tarot, which I have found is much more about personal enlightenment than it is about forecasting the future.

I have long been interested in tarot from an artistic perspective. Each of the 78 cards within a standard tarot deck tells a visual story. Most of us are familiar with the Rider-Waite deck, also known as the Smith-Waite deck. It was designed in 1910, a collaborative effort between artist Pamela Colman Smith and mystic A.E. Waite. Since that time, artists have been inspired to create hundreds of different decks following their own sensibilities to design these mini works of art while cleaving to the meanings of the cards.

I would like to design my own deck someday. However, before I can do that, I have to get to know the cards.

I bought my first pack of tarot cards probably two decades ago. I did not purchase a standard Smith-Waite deck. Instead, I let the artistry of the cards draw me to a deck. I chose The Sacred Rose Tarot Deck by Johanna Gargiulo-Sherman. I used this deck for years, relying on the little enclosed instruction book to figure out the meanings of the cards. It was not an effective way to remember the cards.

I purchased a Smith-Waite deck with instructions printed on the cards, but I hated the deck, especially those nasty reverse meanings that come from drawing cards upside-down, and almost never used it. I finally gave it away.

About three years ago, I bought a book called The Creative Tarot by Jessa Crispin that started giving me a handle on the meanings of the cards. I wrote about the book when I was first reading it.

Last year, my travels inspired my further exploration of tarot. While waiting at the MSP airport in August for a flight to New Orleans, I bought The Tarot Bible by Sarah Bartlett and read most of it on the plane. This book focuses a lot on the idea that tarot is meant for personal enlightenment. It also had a tip for dealing with reversed cards. When drawing cards, if reversed cards give you grief, simply flip them upright. (Me? I actually shuffle the deck with all the cards facing the same direction and lay them upright.)

A friend suggested that my husband and I visit a shop called Marie Laveau’s on Bourbon Street while in NOLA. The shop sells tarot cards. It was here that I found my favorite deck of tarot cards, the Paulina Tarot designed by Paulina Cassidy, once again drawn to them by their artistry.

Using The Tarot Bible and The Creative Tarot, I started doing daily readings in order to learn the cards. The friend who suggested visiting Marie Laveau’s loaned me another tarot book when we returned: Around the Tarot in 78 Days by Marcus Katz and Tali Goodwin. This book goes deeper than the other two, but all have been helpful in learning the tarot. I liked this book so much I bought my own copy.

Within a few months, I acquired two more decks of cards, Rackham Tarot, which uses the art of Arthur Rackham, and another deck by Paulina Cassidy, the Joie de Vivre Tarot. I purchased the Rackham deck myself and received the Joie de Vivre deck from my husband for Christmas.

The Rackham deck is strange in that the images weren’t designed specifically for tarot. They are Rackham’s book illustrations and someone has tried to apply them to the meanings inherent in tarot. It doesn’t work very well.

For several months, I kept up the daily readings and I’ve gotten to know quite a few of the cards on sight. 6 of Pentacles is the giving/receiving card and because I work in a nonprofit, I see how it applies to this field. I also tend to draw this card a lot, like a lot a lot, so it became easy to remember. Whenever I draw the 6 of Pentacles, I mentally say, “Oh, giving/receiving again.”

I now do readings on a weekly basis and use the cards and spreads to think through problems. In short, to seek enlightenment.

I don’t put a lot of faith in using tarot cards to read the future – they’re not very good at that. Historians are actually much better at predicting the potential future than the cards because they have the past to draw upon.

And speaking of history, there are tarot cards that refer to history. The one that directly reminds you to call on your past for inspiration and enlightenment is the 6 of Cups. I drew that card last week and it inspired me to write this blog post mentioning both tarot and history. This was the whole point of rolling The Pragmatic Historian into this website, so I could feel free to discuss all my passions in one place.

I’m going to end this post where I started, with the pandemic and staying at home rather than gathering with family on Easter. Even though this is a sacrifice and I miss seeing family, we’ve got good news in Minnesota. This article from Politico states, “The CDC found Minnesota recorded the lowest cumulative incidence rate, at under 21 cases per 100,000, compared with New York City, which had the highest at 915 per 100,000.” Our social distancing efforts are working. That’s a great thing to celebrate for Easter. My hope is that social distancing will curb the spread of COVID-19 in other places as well.