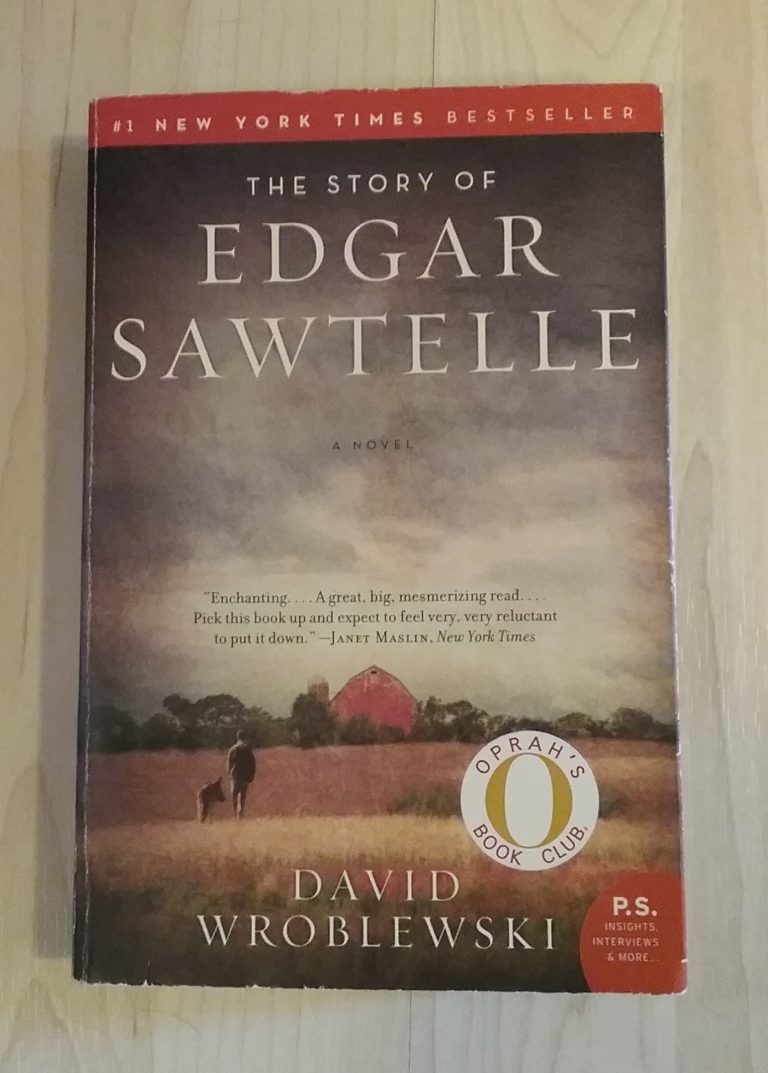 If you haven’t read this book and want to, do NOT read this post!!!

You have been warned. 🙂

My year of rereading continues, although I am losing steam for the project. There are simply too many other books calling me to read them. Also, there’s this book ….

The Story of Edgar Sawtelle by David Wroblewski.

I am so heartsick by the ending of this book that I’m wondering what made me want to read it again. I think it’s because I psychologically blocked the ending. But, I remembered how wonderful the writing was, how the story swept me away, and I like books that can do that.

So, I read it again and was once again disappointed.

After I started reading, I noticed that I was getting tense as I closed in on the first hundred pages. That’s when Edgar’s dad, Gar, dies. I most assuredly remembered that from my first read.

Edgar is this lovely, sensitive boy who can’t speak. He can hear, but because he can’t use his voice, he speaks in sign. Edgar’s family breeds a special type of dog that is known for its intelligence. It’s the sort of dog I would want, except that its fictional, with Sawtelle dogs just being part of this book. Edgar grooms and trains the dogs, using sign to speak to them.

Once his dad is dead, it’s just Edgar and his mom running the breeding and training operation, which is exhausting for them both.

Of course, there is intrigue, because this wouldn’t be a story without something mysterious and bad. When Edgar’s dad dies in the barn, Edgar knows something is strange about his death. He feels responsible for the death because he can’t speak, so he can’t call for help using the phone. This is rural Wisconsin, so he’s not near enough to town to get anyone, either.

As it turns out, Gar’s brother Claude is the rat bastard who killed him. You can see the manipulation of this character throughout the book and it’s obvious he is the killer. Edgar knows this and he ends up running away with 3 of his dogs. So, then we follow him as he makes his way north toward Canada, stealing food and finding shelter wherever he can for himself and the dogs. This section of the book is a reprieve from the story at the farm, where Claude has moved in with Edgar’s mom. (This Claude is a real piece of work.) Even though Edgar is on the run and doesn’t have an easy go of it, at least he doesn’t have to deal with a killer uncle.

Edgar meets a nice man, Henry, who takes him and the dogs in when one of the dogs is injured. Henry ends up keeping 2 of the dogs and giving Edgar and his 1 remaining dog a ride back most of the way to the farm. This is a pleasant interlude before the dramatic and heartbreaking ending in which …

… the Sheriff is blinded,

Edgar’s mom is pinned down and can’t do a thing,

the barn goes up in flames,

Edgar saves all the dogs and a bunch of the breeding records,

Edgar is poisoned by Claude and dies,

and Claude can’t find his way out of the burning barn and dies.

Good lord! This is a book in which every major character dies or is horribly injured for life. For heaven’s sake, what utter tragedy. Can’t anything good have happened? I mean, sure, Claude dies, but couldn’t Edgar have lived? Jeez, what a major downer. I’d say this is sadder than The Old Man and the Sea, which I deemed the Saddest Book Ever in 2016.

So, if you want a book that carries you through with excellent writing but will make you cry for its unfairness to the main character, read this one. Me, I’m going to put it away on a shelf and avoid it for a good long time.

2 thoughts on “Rereading: The Story of Edgar Sawtelle”