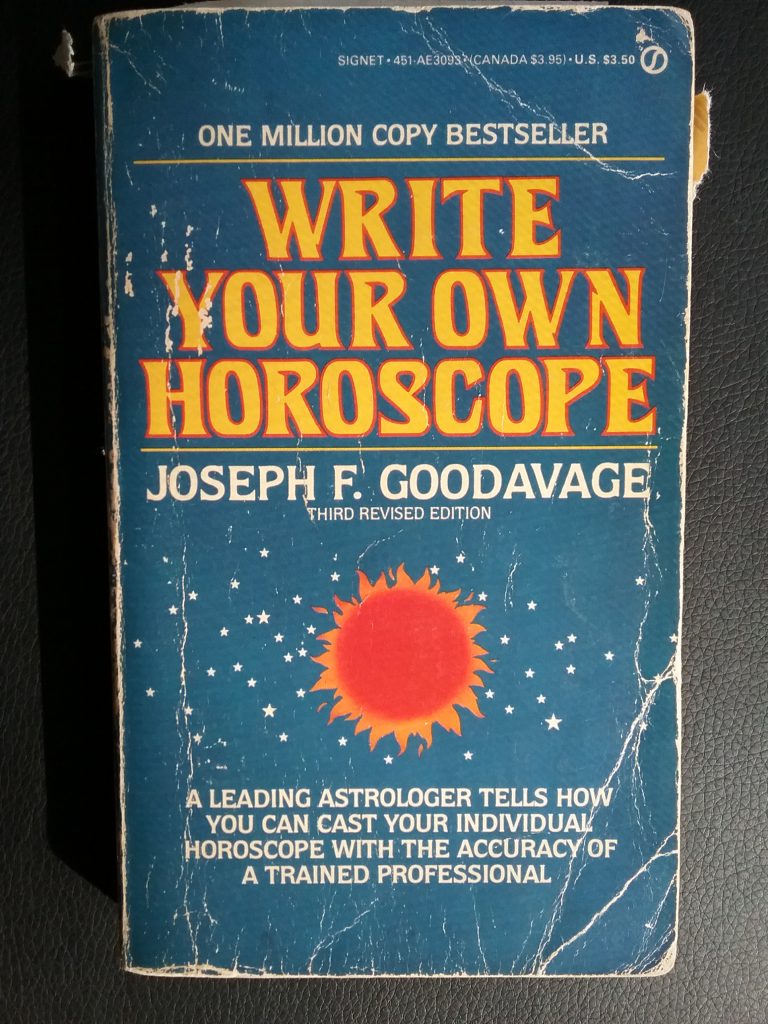 Today is my birthday. That makes it a great time for a birthday history challenge!

I can credit my birthday for nudging me toward history, specifically astrology.

Yes, astrology. That unscientific load of hogwash** that aligns human personalities to the constellations.

I’m a Libra and a proud one, at that. The symbol for Libra is the scales of justice and I’m all about fairness and justice and balance. It’s the only symbol within western astrology that is an object, not animal or human. I’m not quite sure what that says about Libras, but it is an interesting fact.

Astrology Leads to Study of History

I studied astrology heavily in high school. Not IN high school, mind you, because there weren’t classes in that for obvious reasons. I learned about it on my own through books from the library. (No internet then.)

I was so interested in the topic that I bought a couple of books, including “Write Your Own Horoscope” by Joseph F. Goodavage. I’ve always been a do-it-yourself gal, so of course I wanted to learn how to plot my own charts. This is one of the few books I’ve ever written in, having penciled in the birth dates and times of friends, relatives and famous people, and figuring out a few astrological charts, starting with myself, of course, because that’s what you do if you’ve got any modicum of self-interest whatsoever.

In the course of my astrological studies, I discovered that Eleanor Roosevelt and I share a birthday. During my senior year of high school, I took the dreaded Research Paper class (which was one of my favorite classes even though other students constantly complained about how horrible it was – which is why it was dreaded). During the class, each of us had to write 2 research papers, complete with proper citations and everything. It was great preparation for college and for the constant historical writing I do now.

My first paper was on Jack the Ripper. (Is that standard fare for a high school student? If I’d been born a bit later, perhaps I would have been a goth in high school.)

In casting about for a topic for my second paper, I chose to study Eleanor Roosevelt’s life through the lens of astrology. I discovered she was heavy into social justice and equality and giving a shit about the poor and she profoundly influenced her husband Franklin’s policies. How cool is that? Here’s this woman who got a late start in being taken seriously (primarily because she wasn’t “pretty” enough) and she wielded an enormous amount of power on the world stage. She was chair of the United Nations Human Rights Commission and “was instrumental in formulating the Universal Declaration of Human Rights“. That’s a Libra for you.

Through astrology and a common birthday, I found a historical figure who is a kindred spirit to me, someone I can admire for her achievements related to social justice. Plus, I learned how to do history research that is foundational to my work today. (And, come to think, I somehow managed to study astrology in high school.) See how that works?

So, here’s my challenge for you. Find someone well-known that you admire who shares your birthday, or who was born the same year you were (think Chinese astrology), or who has the same Myers-Briggs profile as you, and conduct some research on them. As you study their life and history, do you find some points of commonality with them? Are they as admirable as you initially thought? Do they match their astrological or Myers-Briggs profile?

**For those who like to sneer at astrology and other personality-type schemes because they are unscientific, I’d like to point out that the introspection caused by these fields of study can lead to science-based studies of the larger world. Astrology was the precursor to astronomy. Astronomy’s history is in astrology. Sneering doesn’t change that. Instead, it closes off potential insight that may lead to greater scientific discoveries.