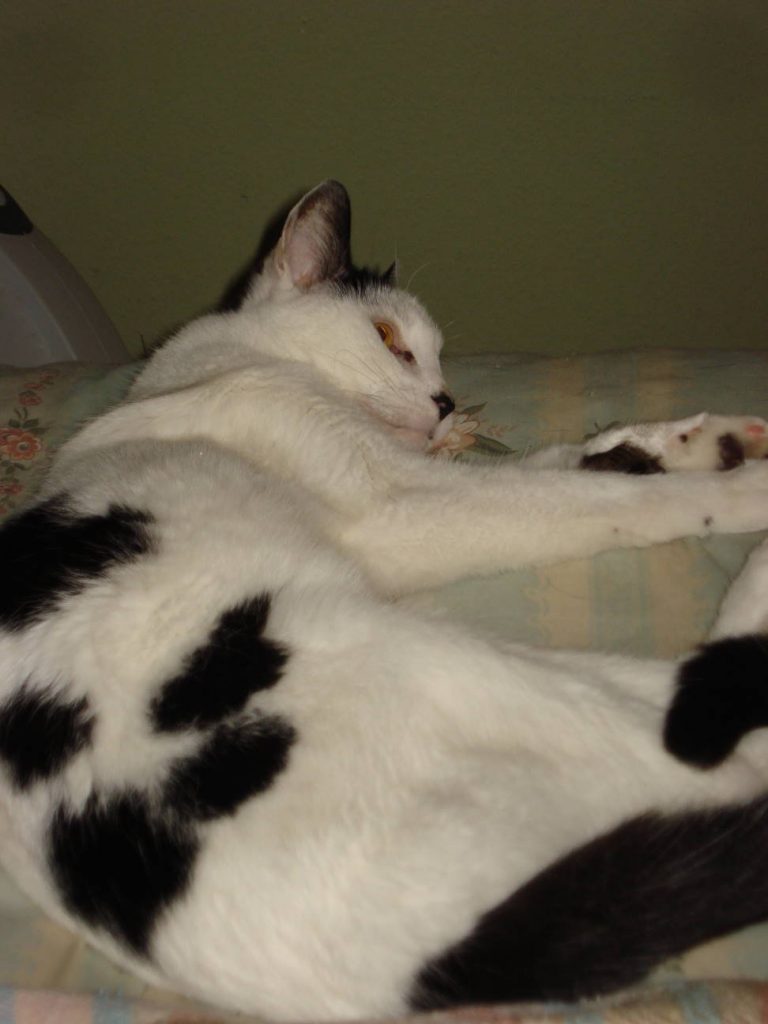 We grow old cats in our house. Until recently, we had 3 geriatric cats in the house. Rosalyn died within the past couple of years at the age of 20. (For the life of me, I can’t pinpoint which month or year of her death.) Stinky is 17 years old. Inky was 15.

We lost Inky almost 4 weeks ago. I use the word “lost” purposely. While Erik and I were loading the truck for a State Fairgrounds antique sale, Inky slipped out the door and under the front step. He had done this regularly before, having been the cat who favored being outside. We figured he’d come out soon and want to be let back in, so we ran to the shop to pick up a few things. When we returned, he was nowhere to be found.

This did not bode well. We were due to leave the next night and Inky had not been well for some time. He was painfully skinny. He had developed an insatiable appetite and would yowl to be fed moist food, even though he had dry food always available. He even learned from the dog how to beg for food from our plates.

After looking up his symptoms, we suspected he had hyperthyroidism, which is not uncommon in cats over the age of 10. Typically, this disorder is caused by a tumor on the thyroid gland and the most effective treatment is a costly radiation therapy that involves sending the cat away for a couple of weeks. The other option was to control the condition using medication. Because of his age and the cost, the first option was out. Medicating Inky wasn’t a great solution, either. He wasn’t the sort of cat you could easily pick up. The only affection he could tolerate was having his head patted or bumped for a minute or so and then he was done. We decided we’d just feed him more and make sure he had plenty of water. (His condition made him constantly thirsty.)

We looked all over the neighborhood and Erik checked the Humane Society the day after he left. Nothing.

We’ve been looking around this past 4 weeks, wondering what happened to him. We suspect that he went away to die.

I don’t know if there’s anything to it, but I’ve heard that it is not unusual for cats to want to find a quiet place to die, one that is away from everyone. If this is what Inky needed to do, it feels appropriate that he went outside to do it. He loved being outdoors and we humans are very good at trapping our pets indoors. We don’t give them a chance to have privacy when they want it.

We adopted Inky from a farm after Erik and I returned from helping out in the aftermath of the Siren tornado. This was in the summer of 2001. Erik’s parents had taken the kids to a farm and there were kittens. While we already had 2 cats (Roz and Stinky) at home, the kids talked us into a third … hence, Inky, whose “real” name was Rorschach, after the ink blot test. (How could we not name him that with all those spots?)

My brother called him Rotten Spotty, for good reason. Our Inky was not an easy cat to love. He didn’t like affection, though he made a sport of waking all of us up in the middle of the night. And if we tried to shut him out of the bedroom, he would stand outside and scratch the floor until we couldn’t bear it and let him back in. He couldn’t tolerate being held, which made it difficult to retrieve him from outside when he escaped.

His favorite person in the house was our son Ian. He would allow Ian to hold him and when Ian left for school away from home, Inky was bereft. Then he tried to hang out with Olivia and Sebastian.

Strangely, while Inky was not affectionate, he was the Ambassador Cat of the house. He kept tabs on Rosalyn while she was convalescing in the upstairs closet during the end of her life. He also regularly slept with Stinky on our bed. He was the first of the cats to put himself in the vicinity of Doggle Woggle. No small feat, that. If the dog pestered him, Inky would have none of it. Inky’s ambassadorship extended to humans. When visitors came to the house, Inky was the cat who made an appearance.

Inky was a smart cat. As mentioned above, he learned how to beg from the dog. When he was younger, I caught him attempting to turn the knob on the front door, which meant jumping up and trying to work the knob with his paws. He knew how to get the door open, even if he didn’t have the height and required opposable thumbs to do so.

As I have walked the dog these past few weeks, I still look for Inky and wonder what became of him. Did he slip into someone’s garage? Go down into the sewer? Find a nice bed of leaves to curl up in?

My suspicion is that he crawled into these bushes in a neighbor’s yard:

Why do I think that? Because Doggle Woggle was intent on sniffing these bushes within a week or so of Inky disappearing, whereas he had never done so before. Also, Erik and I saw more than one neighborhood cat hanging out near these bushes, something we hadn’t seen before.

We will never know what happened to Inky, but I hope his end was peaceful and comfortable.