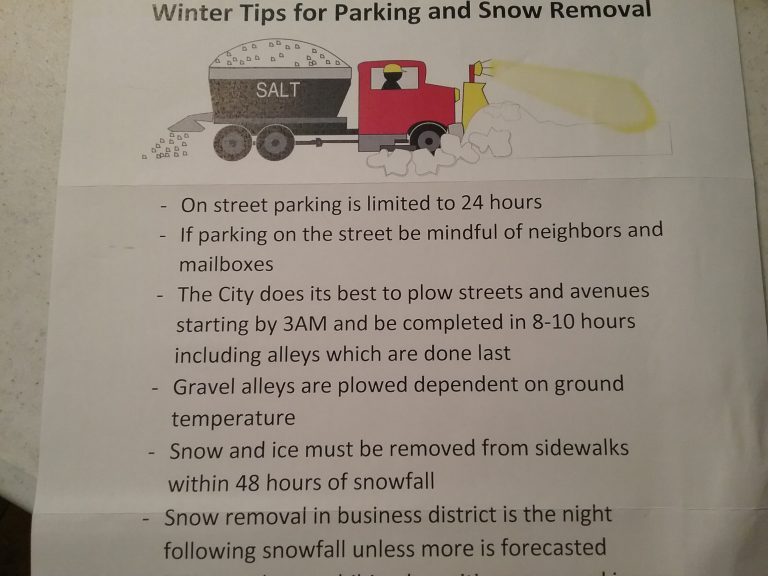 It’s been snowing here in Central Minnesota over the past week or so. We’ll see how much eventually accumulates. When there is a significant snowfall event, we have to be up at the crack of dawn to move our cars from the street to the avenue so the plows can do their work.

A few weeks ago, we got a notice from the city in our water bill regarding snow removal.

It informs residents of various city plowing procedures and expectations of home and business owners for snow removal.

The first item on the list states, “On street parking is limited to 24 hours.”

I’ve never really given that ordinance much thought, even though we ended up with a ticket on a Christmas Day years ago when a ton of snow had dropped and we didn’t have time to get our cars moved before the plows came through. The ticket was for being parked for longer than 24 hours, because obviously we hadn’t moved our cars with the snowfall. (Merry Christmas from our local police, eh?)

It dawned on me when we got this notice that limiting on-street parking to 24 hours is the sort of ordinance that works against poor people, who tend to be renters or may not have a garage or driveway on their property.

Hubby and I have spent most of our adult lives with incomes low enough to meet poverty guidelines. We bought an 1894 house that needed a lot of fixing up, so we got it cheap. It had a fallen-down garage that had to be removed. We were so poor that a Sentence-to-Serve crew demolished it for us. We put a shed up in its place because the cement underneath was in such bad shape that a proper garage wasn’t going to fit and we couldn’t afford to redo the cement or build a garage. Hubby and I actually built the shed ourselves.

Having a 24-hour street-parking ordinance is a way to punish those who don’t have access to off-street parking when the police choose to enforce it, and that’s mostly going to affect poor people, who are least able to afford the fine.

It’s the sort of ordinance that subtly has a bias embedded in it.

As I was mulling this over, one of the things I realized with all the snow-removal policies is that our city likes it nice and quiet. Everything must be orderly at all times … tidy sidewalks, tidy lawns, no excessive noise, not too much traffic.

Decades ago, our city had the opportunity to have a community college based here. The city turned it down because people (city leaders? residents? not sure who) didn’t want all those exuberant young people in town causing problems.

And there is the root of the issues we’ve had with economic development over the years. We want the money that results from economic development, but we don’t want all the messy people that come with it. I suspect this is the tension that most rural towns feel, the desire to stay quiet and orderly while maintaining enough financial growth to keep solvent and provide services, like snow plowing, to residents.

It’d be nice if they could find a way to do this without parking ordinances that have the potential to disproportionately punish the poor.