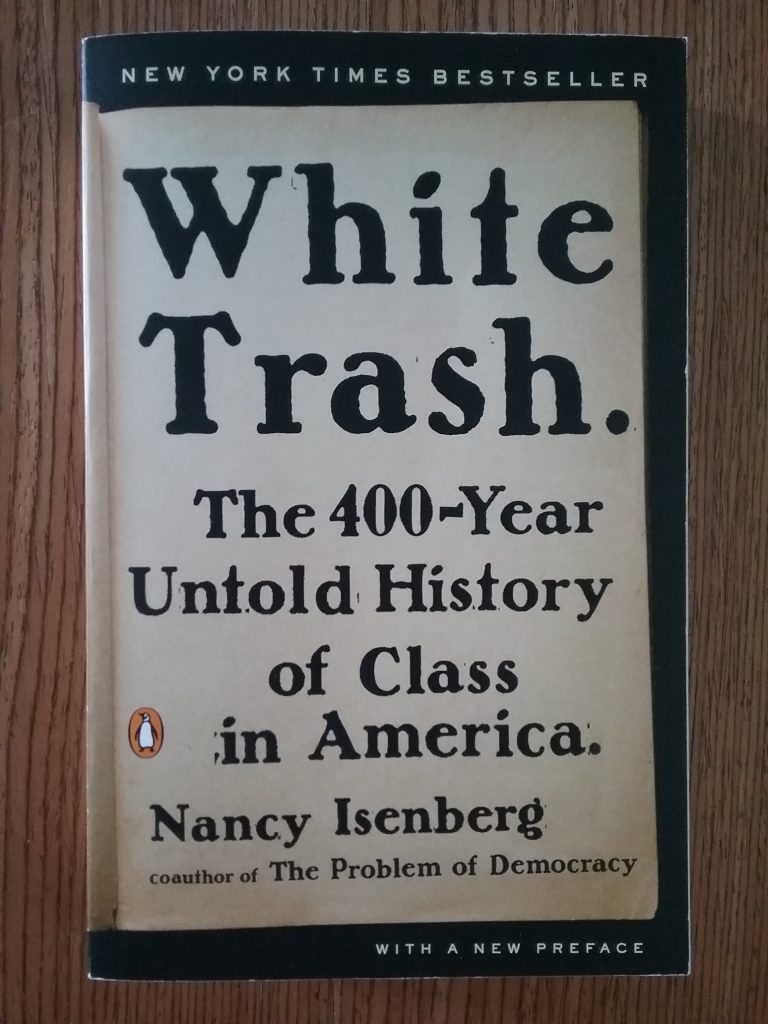 I set a goal of reading at least 3 history books this year. The first one I picked up was recommended to me by a friend: “White Trash. The 400-Year Untold History of Class in America.” by Nancy Isenberg.

Little did I know how incredibly relevant the book would be in terms of current events in Minnesota when I started reading this at the beginning of May. The killing of George Floyd, an unarmed Black man, at the hands of Minneapolis police last week was just one of many shameful instances of law enforcement taking the lives of people of color. That the killing was recorded and the cops involved did not act to stop Floyd’s death shows how embedded racism is within law enforcement and society in general.

A number of scholars in Minnesota have been doing excellent work in uncovering systemic racism aimed at African-Americans, including the University of Minnesota’s Mapping Prejudice project that reveals the redlining practices that prevented Black people from buying property in the Twin Cities metro area and Christopher Lehman’s research on Southern slaveholders buying land in Minnesota and their influence over communities like St. Cloud. The Morrison County Historical Society, where I serve as the executive director, published an article by Lehman in 2016 about a house in Little Falls that has a connection to slavery.

Nancy Isenberg’s book “White Trash” examines how class and race intertwine back to the 1500s colonial era, long before the United States was established. English colonists saw America as a vast wasteland where they could dump their “white trash” (Isenberg points out that this term is considerably older than we might imagine), the convicts, the prostitutes, the poor and homeless people who were a drain on society back in England. Never mind that Indigenous people were here in their homeland. Because they did not “own title” to the land, the colonists figured it was here to be taken by those who would own title, cultivate it, and exploit its resources.

Naturally, it was the wealthy and powerful landowners who would do the exploiting, using those they saw as white trash to do the work. According to Isenberg, “Waste men and waste women (and especially waste children, the adolescent boys who comprised a majority of the indentured servants) were an expendable class of laborers who made colonization possible.” (pg. 42) (Isenberg discusses the many other names used to describe white waste people in the book, terms like “mudsills,” “clay-eaters,” “hillbillies,” and “rednecks.”)

Within this milieu, there were also African slaves, who were forcibly brought here as early as the 1500s by more colonizers than the English.

Isenberg argues that wealthy and powerful landowners throughout the development of the U.S. and beyond have used the white trash of society to keep a firm hold of their power and resources by pitting them against people of color. Politicians continue to use this tactic to hold and consolidate power and resources and make laws and rules to benefit the upperclass (like the redlining in the Twin Cities metro). It is at the root of the racism we see today, a systemic racism that is so baked into the nation’s psyche that law enforcement can wantonly kill people of color and rarely be held accountable for it.

“White Trash” has given me important historical context for the killing of George Floyd and the resulting protests in the Twin Cities and around the country. It is a dense book that is well-cited, including over 100 pages of notes. It is not a quick read, but with matters as critical as ending systemic racism, those of us white people who have grown up embedded in this system need to take the time necessary to understand the hurt and pain we have caused to our BIPOC (Black, Indigenous, People of Color) neighbors. We have got to fix this.

1 thought on “Reading to Understand the Roots of Racism in the U.S.”