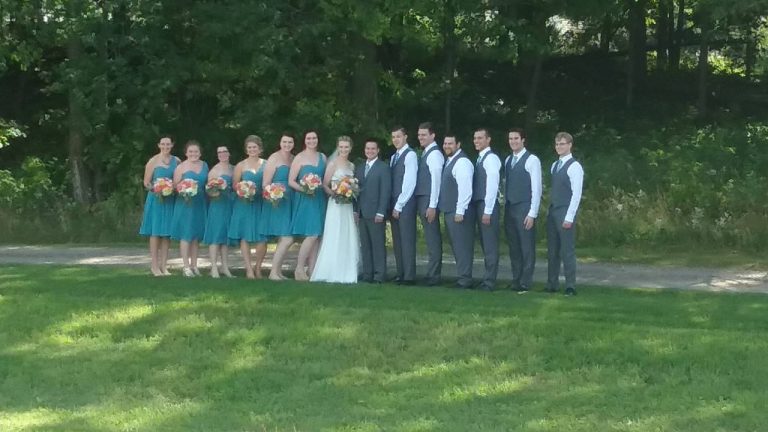 Last Saturday, September 10, 2016, our daughter Olivia married a kind, sweet young man named Eric. Because his name is Eric and my hubby’s name is Erik, I’ve taken to saying “Olivia’s Eric” and “My Erik” in order to distinguish between the two. We are absolutely delighted to have Olivia’s Eric join the family.

Olivia and Eric’s wedding was a lovely affair that took place on a beautiful farm in central Minnesota owned by long-time family friends. As our son Ian said, it was the perfect mix between sophisticated and rustic and reflected the personalities of Liv and Eric. Not only did the farm setting lend to this feeling, but so did the decorating sensibilities of Liv and Eric. Aqua and apricot were the accent colors of choice and the execution of the decorating was simple, but classy.

I was off work for a week to help, as were Erik and Liv. The Tuesday before last started with an 8-hour tulle-hanging marathon. As the week wore on, more people joined in the preparations. While we were working, it dawned on me that there were a number of lessons to be learned from planning and preparing for a wedding. The first lesson being ….

Many hands make light work. That 8-hour tulle-hanging session, which involved borrowed scaffolding that was a god-send, was grueling because there were only three of us to work on it. When it came time to hang the bistro lights, three more people joined us and the job was much easier and quicker. We had acres of help in setting up tables, chairs, place settings, and centerpieces, as well as in serving the food and taking everything down, and each set of hands that pitched in smoothed the tasks for everyone involved.

Prior to many hands making light work was the lesson in being well organized. Olivia and Eric planned their wedding down to the smallest details, first by prioritizing what was important to them about the day. Liv, who inherited her Grandpa Art’s love of spreadsheets, had multiple spreadsheets to track vendors, the wedding party, the week’s set-up schedule, and the schedule of the wedding day. These spreadsheets were critical to pulling off an event with lots of complex details.

Because Liv knew her spreadsheets by heart, another wedding lesson learned was: When in doubt, ask the bride. If the bride wasn’t around, ask the groom. This allowed Liv and Eric to realize the vision they had for their wedding.

As we worked our way through the week, problems inevitably cropped up. As we solved each one in turn, we realized that complex weddings are good opportunities to use our ingenuity.

Like the Boy Scout motto, “Be prepared” is another wedding lesson. Erik’s sister Glenys put together an emergency kit for Olivia, which she gave to her as a bridal shower gift. That kit came in handy when Liv’s dress needed a wee bit of sewing.

Erik and I had to do a lot of traveling around central Minnesota in order to retrieve items such as cake, flowers, ice, a refrigerated trailer, and etc. One thing we did not count on was how much time all this traveling would take. It cut into some of the time we needed for other tasks. If we had to do it over again, we would allot at least double the time for traveling. Thankfully, all those many hands took on the tasks we couldn’t get to.

Finally, I learned a couple of very important lessons about baked beans. 1) People eat a lot fewer beans than you might expect. We prepared 9 institutional sized cans of beans for 175 people. We needed less than half that amount. 2) Clean up the baked beans and rinse out the bean pans immediately after serving. Darkness fell around the time people were finished eating. Because our food prep area was under a tent outside, we could not see to clean things up. Thus, the beans sat in their roasting pans until the next day. I was in charge of cleaning the pans and believe you me, the beans had become glued to the sides and were darn near impossible to remove. Thankfully, I had help from my son Sebastian in scrubbing the last roaster as the rental company came to retrieve their items. (Many hands again!)

Below are a few of our many helpers. Be sure to look back at the pic of the wedding party because they were all helpers, too. Unfortunately, we don’t have pictures of everyone who assisted, but we thank every single one of the people who pitched in, including the Hamson family, on whose property the wedding was held.

And, because I want to share them, here are a few more photos I took from the wedding day.