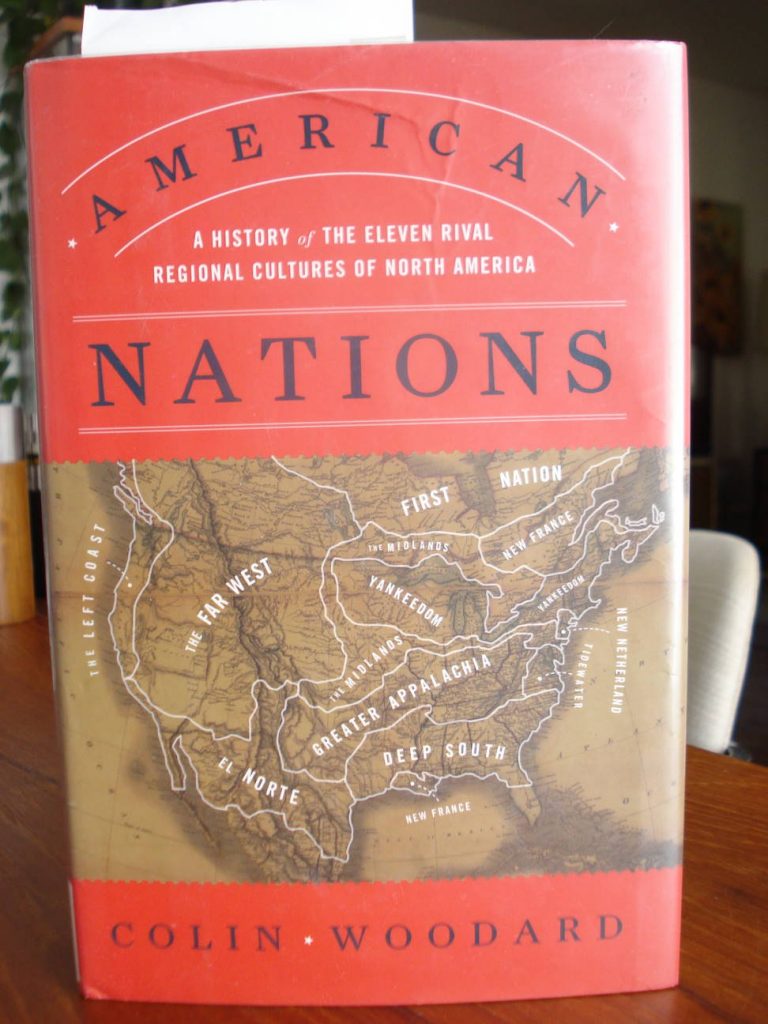 In looking back through the books I’ve read in the past 5 years (yes, I keep a list), I see that I’ve read a number of very good ones. So, when I say a book is the most enlightening one I’ve read in 5 years, that’s saying something.

“American Nations: A History of the Eleven Rival Regional Cultures of North America” by Colin Woodard has completely changed how I see the United States and its politics. (Woodard also discusses Canada and Mexico in this book as the regional cultures don’t stay neatly within state or country boundaries.) I will never look at an issue facing the U.S. again without framing it around the eleven regional cultures Woodard has explained in this book.

It seems improbable that these regional cultures, which are El Norte, Yankeedom, Tidewater, Deep South, The Midlands, First Nation, New France, New Netherland, Greater Appalachia (a.k.a. Borderlanders), The Far West, and The Left Coast, could be founded so long ago and still be influencing us today. Why aren’t we more culturally mixed at this point in history?

While I do see some mixing in central Minnesota between Yankeedom, The Midlands, and New France, the state is still predominantly in the domain of Yankeedom culturally and politically, with people here striving for strong communities that support their citizens. All are seen as equal. Those in Yankeedom tend to see government as being by the people and for the people … all the people. (Those from other regions might think of us as churchy do-gooders, although many of us are a lot less churchy than we used to be.)

Woodard explains the history and cultures of each of these regions, which helped me understand exactly why our country is polarized. This polarization isn’t a new thing; the country has always been polarized, with regions like Tidewater and the Deep South teaming up to defeat the ways of Yankeedom and The Left Coast and vice versa. Meanwhile, The Midlanders and Borderlanders side with whichever regions seem most in keeping with their feelings at the moment, often serving as swing states in elections.

As a historian by day, much of the history I read tends to be about specific individuals, organizations or events. It is rare that I run across a history book that allows for a wide-angle view that puts a great number of things into perspective. This is my favorite kind of history and “American Nations” is just such a history.

Normally I am loathe to force anyone to read anything, but If I had the power to pick required reading for high school and college students, this book would make the list. I’d encourage serious discussion of the book, too. It wouldn’t hurt the adults in this country (or our legislators) to read it either.