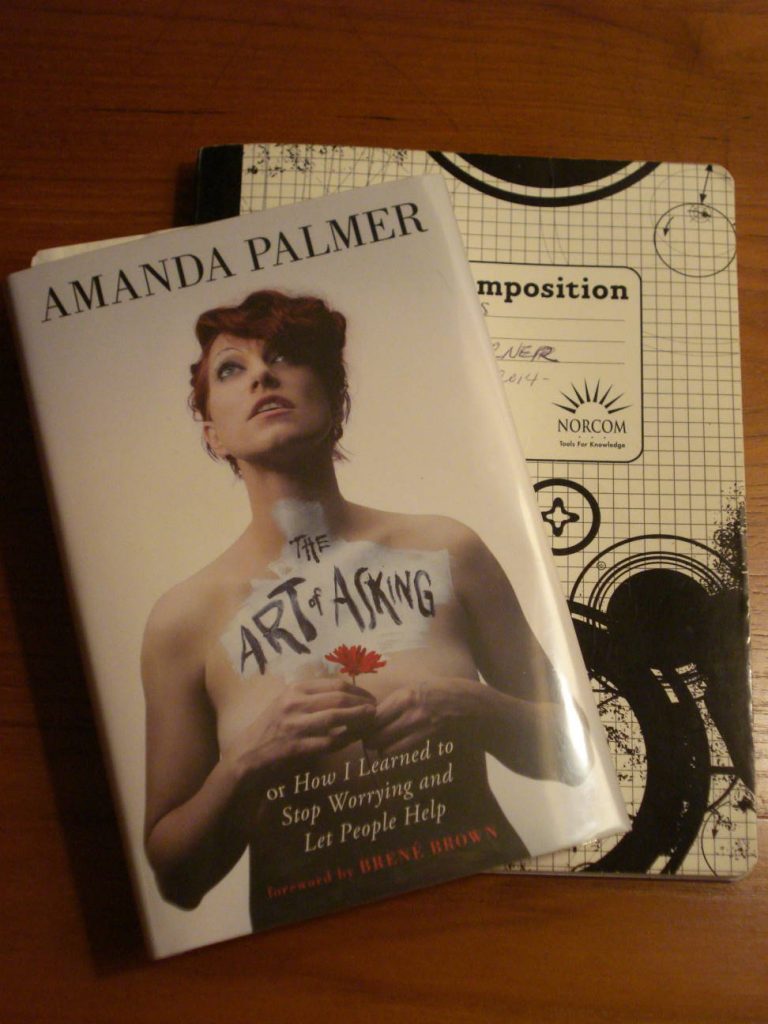 Amanda Palmer is a musician, but that’s not how I know of her. I first heard of her through Neil Gaiman’s online journal. Neil is a writer of strange and glorious tales of gods come to earth and secret doorways to places and beings outside of this world. (Hard to capture his work in a brief sentence, but that’s my stab at it.)

My intro to his work came not through his acclaimed Sandman series, which I have never read, but through his novel American Gods. I’ve read a number of his other books, including Anansi Boys, Coraline, Good Omens (with Terry Pratchett), Fragile Things, The Graveyard Book, Neverwhere, Stardust, and The Ocean at the End of the Lane. (The one book of his I’d pinch baby armadillos to have is the one he wrote about Duran Duran prior to the work that made him famous.) I followed his journal closely a few years ago because, as a writer, it was compelling to read how a successful writer conducted himself in a public forum. There were good lessons about how to be productive as a writer and how to deal with public controversy. When Neil announced that he was engaged to Amanda Palmer, who seemed to be just as open online and creative as he was, I had to check out her blog. (Sounds kind of weird, but isn’t this one way we find new artists, writers, and musicians to follow, by taking the recommendation of someone whose work we respect?)

Amanda often begins her blog posts with “hola comrades!” and proceeds to let her thoughts tumble out in a stream-of-consciousness style, with no time for capitalization. She writes Facebook posts much the same way. On all her channels of communication (she adores Twitter, as well), she wants to hear from fans and genuinely engages with them. She sometimes gets embroiled in controversies without meaning to, typically by people making assumptions without knowing the full story. When this happens, she takes to her blog and explains her side of whatever issue has people’s undies in a bunch and bravely invites their feedback. (I’m no stranger to online trolls, but if I had to put up with the hostile crap that has been thrown her way, I’d probably be hiding under a rock by now.)

Amanda was asked to do a TED Talk after her massively successful (and inadvertently controversial) Kickstarter campaign. The talk, which has been viewed over 6 million times, was called The Art of Asking and in it Amanda discusses the power of asking fans for support as an artist. She was then asked to write a book on the same topic, which was released in November 2014. As Amanda does in other avenues of her life, she crowdsourced the book-writing effort, asking her followers to answer questions that helped her work through sections of the book. I jumped in with my two-cents on a couple of questions, including one about the difference between asking and begging.

Investing yourself even a little in someone else’s book (whether by following the process or answering a question or two) makes you want to read that book. When Amanda said that it would soon be available, I went to my local library’s online system and requested the book, which was not yet in the catalog. Someone else had ordered the digital version before me, but I’m an old-fashioned girl who grew up on books with covers and paper pages, so I ordered a hard copy. It is not lost on me that this was an act of asking and that it was the first time I had ever asked my library to acquire a book it did not yet own. (Great power in that, I’d say, and I highly recommend it to those who love libraries, those wonderful socialist institutions of knowledge-sharing. Most library systems make it very easy to request books for the collection.)

When I got the email notice that the book was in and picked it up from the library, I wanted to immediately race home and practice hygge, just get all cozy, ignore the world, and read. Instead, I read it every chance I could over a few days.

The book is written in Amanda’s pell-mell blog style, but gussied up for a book format. Letters are capitalized and there are no “hola comrades!” involved, which was a bit of a bummer. It did make me realize a basic difference between writing for blogs and social media and writing for a book. A book is like a formal speech and blogs and social media are like casual conversation. (For those of you expecting well-polished essays for personal blog posts, please lighten up. Do you expect a formal speech during casual conversation? That scolding includes me, for as a writer, I expect my blog and social media posts to be fully polished.)

Once I became accustomed to Amanda’s book voice, which didn’t take long, I was immediately taken with her story. She discusses being a human statue (The Eight Foot Bride), her Kickstarter campaign, TED Talk, music career, communal living with other artists, and the controversies she has stirred up. She also details her relationships with her husband Neil and her good friend Anthony. The thread running through the book that connects these various parts of her life (other than Amanda herself) is the willingness to ask for what she needs and the graciousness to accept people’s help.

One of her mantras, gleaned through learning that Henry David Thoreau’s mom brought him donuts while he was living at Walden, is “Take the donuts.” As artists, we often have a hellavu time asking for help, but an even harder time accepting it. Scandinavian Minnesotans might be even worse at asking and accepting than artists. Try being a Scandinavian Minnesotan artist. Egads, we’re doomed! But Amanda’s point is that we don’t have to be. We can work through our fear of being denied when we ask for help. Her book is a guide to that. She lays bare all manner of hurt she has dealt with in her quest to crowdsource her artistry. Her efforts are also an example of how to build a following for your work, one fan at a time and with genuineness, by engaging people personally.

Reading the book made me realize that I have never heard Amanda’s music. I became a fan through her writing  and her TED Talk, which goes to show that with the longevity of today’s artists, both artists and fans have to expect that people can become fans at any point in an artist’s career and we all have to be okay with that. Some fans might think I’m a heretic because I haven’t read Neil Gaiman’s Sandman series or heard Amanda’s Dresden Dolls work. Certainly I’m not a “true” fan if I haven’t been following along since the beginning. What a bunch of hogwash. (Whoa! Memory rings. I wrote an essay about The Late Blooming Fan in 2005 that talks about this phenomenon in a tongue-in-cheek way.)

In any case, Amanda has an amazing sense of ESP because my realization that I hadn’t heard her music came while I was reading and once I got to the end of the book, she has this note: “I am first and foremost, a musician. Writing a book was great, but I desperately want you to hear my music so I don’t lose track of myself.”

I would say she’s much more than a musician … she belongs to the Club of Creative Hyphenates. And now I have some music to listen to.

If you haven’t read The Art of Asking, I highly recommend it. If you’re in the Great River Regional Library system in Minnesota, there’s at least one hard copy to go around. If there are lots of requests for the book, I’m sure the library system will order more.