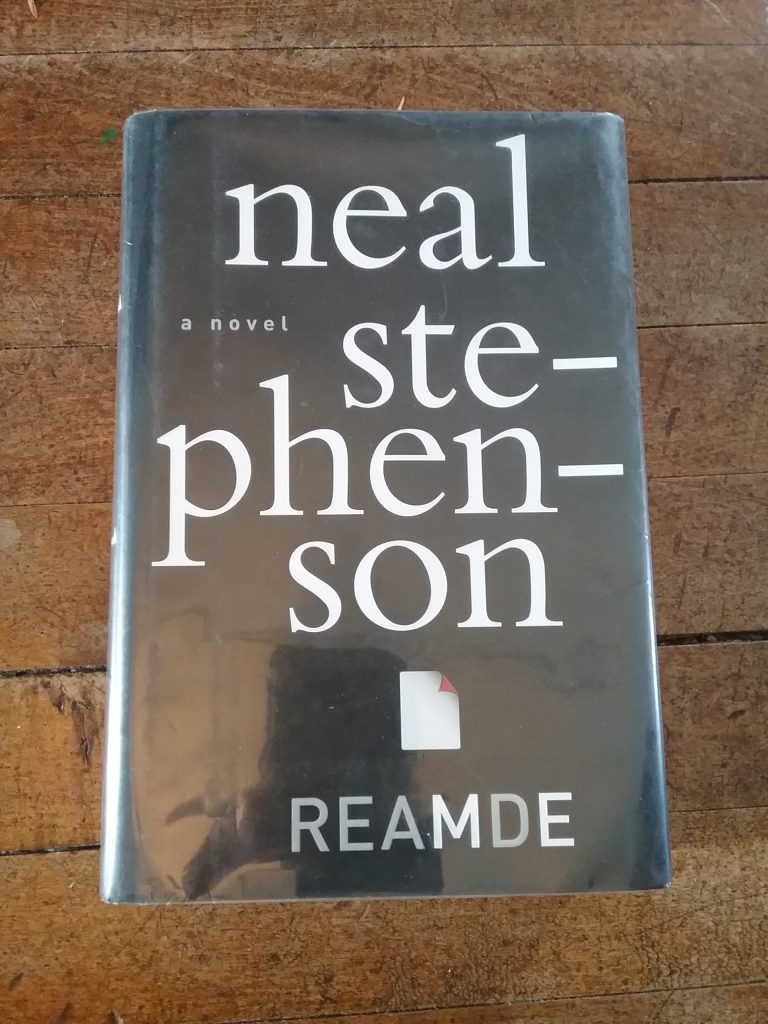 After a marathon day of reading yesterday that ended at 11:30 p.m., I am finally finished with the first book I’ve read in 2020: Reamde by Neal Stephenson.

I picked it up on the promise that it would involve technology, which it does but only tangentially. What I discovered in this 1000+ page tome was a lot of shoot-em-up action-adventure. If you like action-adventure, that’s great, but I’m not an action-adventure gal.

The book was a slog for me, however, once I’ve invested the time in getting to the half-way point, I’m stubborn enough to keep going. (Not sure that’s the greatest strategy for book reading because there are so many books to read and life is short.)

While Stephenson does a great job of describing the gun culture found in Minnesota, Iowa, and Idaho, as well as the game play within a MMORPG (massively multiplayer online role-playing game), something bothered me about his approach to his main character, Zula. I couldn’t quite put my finger on it until I read a passage on page 237.

As the set-up for this passage, Zula is being held hostage and has a chain around her neck with a padlock holding the chain to her neck and another padlock that secures the chain to a tree trunk. She happens to have the key to one of the padlocks.

Here is the passage:

“For a while she had simply kept it [the key] in her pocket, but as it had become clear that something was about to happen, she had found herself lying awake worrying about the possibility that she might be searched and it might be confiscated. She had soaked a tampon in water until it swelled up, then shoved the key into the middle of it and shoved it right up her ass. It was there now.”

Let’s break this down a bit, shall we?

Yes, a tampon can be soaked with water so that it swells up and, provided it is small enough, a padlock key can be jammed into it, although it does chew up the structure of the interior of the tampon. (Of course I tested this, but not what follows because, like I said, I’m not an action-adventure gal.) Very likely, the teeth of that key are going to be felt when it is inserted. Why would any woman think to shove this in her ass rather than put the tampon where it was designed to go, in her vagina?

From a comfort level alone, the vagina is the way to go, but there are a couple of other considerations that menstruating women would be well aware of. Once you soak a tampon, the lost structural integrity makes it more difficult to insert, plus the wetness would leak out down the string, thus putting a wet spot in a conspicuous place on your clothing. When it comes to a woman being searched as a captive of terrorists, a strip search is not out of the question. I would think her captors would wonder more at a tampon string coming out of her ass rather than her vagina. If she’d wanted to really mask what she was hiding, she’d have put a little blood on the string prior to inserting it in her vagina, which might have the effect of grossing out her captors.

As I was reading the novel, I ran across an opinion piece in The New York Times by filmmaker Brit Marling. It is called “I Don’t Want to Be the Strong Female Lead” and it captures the essence of what unsettled me about Stephenson’s treatment of Zula. Zula and the other female leads in the novel, Olivia and Yuxia, come across as tough guys who happen to be women. Marling sums up my observation well with this line from her piece:

“Because what we really mean when we say we want strong female leads is: “Give me a man but in the body of a woman I still want to see naked.””

Yes, it’s good to see female leads in novels who are resourceful and tough, as they are in Reamde, but women aren’t necessarily resourceful and tough in precisely the same way men are. Capturing the subtly of these differences may be as simple (and as hard) as figuring out the mechanics of tampon use.