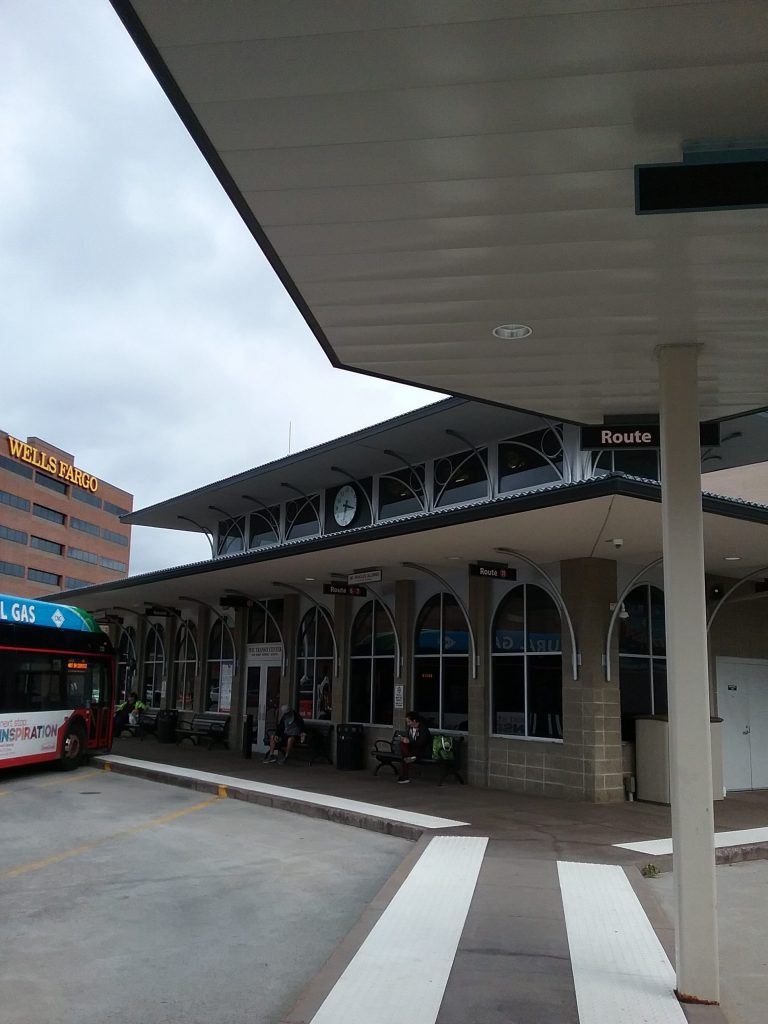 To that end, the Preservation Conference changes location each year and is often held in a historic building or several historic buildings and includes a number of tours of historic resources. This year’s conference was held in downtown St. Cloud, with attendees moving back and forth for sessions in several historic buildings, including the Stearns County Courthouse, Paramount Center for the Arts, Cathedral of St. Mary, Regency Plaza, Whitney Building, Olde Brick House, First National Bank, and Brick and Bourbon. This last business is a restaurant under construction in a historic building, so attendees could see preservation work in progress while attending sessions there.

There were several tours that were part of the conference, including a Voyageur Canoe Tour of the Mississippi River at Beaver Islands. (How many conferences provide you the option to take a canoe tour?) Other tours included the Stearns County Courthouse, Paramount Center for the Arts (formerly a theatre), downtown trolley tour with Mayor Dave Kleis, a walking tour of downtown to view historic tax credit projects, the St. Cloud Veterans Administration, St. Cloud State University Campus, St. Cloud South Side Residential Historic District, and St. Cloud New Deal-Build Historic Landscapes.

That’s a LOT of tours for one conference, so if you were counting steps, you most certainly would have had a good count by the end of this conference. This was despite the rain we saw Thursday, which was misty most of the day but became a deluge by afternoon. The rain forced the cancellation of the Thursday canoe tour, but Friday’s went without a hitch.

(I have promised myself not to try to relay everything I learned and observed at this conference in one blog post. I can feel myself starting to veer off into other topics, so I’m going to pull myself back and stay focused. Let’s see if I can manage.)

The tour I signed up for was St. Cloud New Deal-Built Historic Landscapes, which is a newly-formed historic district that includes four discontiguous (that means disconnected) properties. The properties are Riverside Park with Munsinger Gardens, Kilian Boulevard, Selke Field, and George W. Friedrich Park. I was keen to attend this tour because my co-worker Ann Marie has been working for years to urge the preservation of these landscapes, so I’ve heard a lot about the process.

(I’m not going to use Ann Marie’s full name because she is shy about recognition and doesn’t want a public profile online. Those who know her will understand. But, I do want to point out that she was a driving force, along with Nikki Fisher from the St. Cloud Convention and Visitors Bureau and Betsy, a former St. Cloud Heritage Preservation Commission member, for organizing this conference with SHPO.)

The tour was led by Sue Granger of Gemini Research, who wrote the history/planning document for the district. (I don’t remember the name of this document, unfortunately, but Sue held up a copy during her tour and it is fat. Sue has been writing such documentation on historic properties for decades and she’s really good at it.)

We took a bus from the Metro Transit Station in downtown St. Cloud to Kilian Boulevard, where the tour started. Due to the weather, which was overcast and windy, we started out with Sue giving us some history of the various pieces of the district in the bus while parked on Kilian Boulevard. This street is one of the few planned boulevards outside of the Twin Cities that remains intact and little changed. It was meant to be a grand entrance to St. Cloud on the southeast side of town.

After the bus driver, who was really into history, drove us up and down Kilian, we went over to Selke Field and Sue explained the construction of this large granite wall, which encloses a sports field owned by St. Cloud State University. Granite for the wall came from the quarries at George W. Friedrich Park, which is a short distance away. We did not visit Friedrich Park due to the weather and time constraints, but Sue encouraged us to visit later on our own.

Then we were on to Riverside Park and Munsinger Gardens. We got off the bus in the area south of the dam and walked a bit in order to see a granite wall, a monument to Lt. Zebulon Pike and the Beaver Islands, and a granite staircase down the high slope to the Mississippi River. You would think, how could people be so excited by a granite wall? But, knowing that the granite wall was constructed as a New Deal era project and it was purposely designed to blend well with its surroundings, with construction done using local labor and materials, makes it fascinating. (It’s the history that makes it exciting.)

Sue also pointed out the large, sweeping swath of open ground that is evident through the stand of burr oaks. This used to be a 1970s-era toboggan hill in the park. The burr oaks themselves are special to the park because there are so many of them. Stands of pine trees were also planted within the park over time.

Our tour continued with Sue leading us to the north, toward Munsinger Gardens. We stopped at a stone staircase, also a Depression Era New Deal project, only this staircase is made of stones rather than granite. St. Cloud is known as the Granite City, so most of their New Deal projects use granite, making the stone staircase pretty special.

A crew from Northern Bedrock Preservation Corps, led by Fitzie Heimdahl with technical assistance from a local mason, was performing restoration work on the stone staircase and the tour group got an explanation of the work from those involved.

Then it was on to Munsinger Gardens. Sue explained that the paths through the gardens and the planting areas all remain in the same locations and are even the same sizes as those in the original plans for the site. Not only that, the Gardens continue to have the same plants and flowers that were originally planted there. There is a root cellar for over-wintering bulbs that is still in use. Sue referenced Ann Marie’s thesis on Munsinger Gardens as being an important source of information on the history of the site. (Can you tell that Ann Marie really loves Southeast St. Cloud?)

Once she had covered the history of Munsinger Gardens, Sue gave us 10 minutes to wander around and enjoy the place on our own before we headed back to the bus. I have been to Munsinger many times and my favorite activity is photographing the plants and flowers, so what did I do with my 10 minutes? Took loads of photos, of course!

With the effects of climate change now being felt, preserving existing trees is particularly important because they act as carbon sinks. So, too, do buildings and other structures that use wood in their construction. So long as that wood remains intact, it continues to hold its carbon. If we let it deteriorate by not preserving it, the carbon is released into the atmosphere. But, climate change and historic preservation is a topic for another blog post. (Staying focused ’til the end!)